Here is a clip from an award winning film I produced in 1981-82:  a biography of the Canadian painter Jack Chambers.  I worked with director/cinematographer John Walker and Altantis Films.

“One of Canada’s most
important artists… a painter
of fierce dedication and uncompromising vision.”
David MacFarlane, MACLEANS MAGAZINE

Shot on location in Spain and Canada, this visually lyrical film provides a carefully constructed narrative of the artist’s complex, inspired life. As a young art student Chambers left the provincial town of London, Ontario in the early 1950’s and sailed to Naples. In Spain he broke into Picasso’s house to ask him for advice, and ended up enrolling at the Academy of Fine Arts in Madrid. He lived in Spain for nine years, and when he came back to Canada he brought with him an artistic discipline as sharp as Spanish steel, a sophisticated Argentinean wife, and a new religion—Catholicism. The film includes the full range of Chambers’ work up until his death at the age of 47 including oil paintings, drawings and experimental films. His effort to integrate the influences of photography and to reconcile abstract art with the conservative technical tradition that he embraced in Spain reflects the central conflicts that have defined artistic expression in the 20th century. For the last nine years of his life, Chambers struggled with leukemia, traveling as far as India in search of a cure, yet during his last years he produced much of his most radiant work. 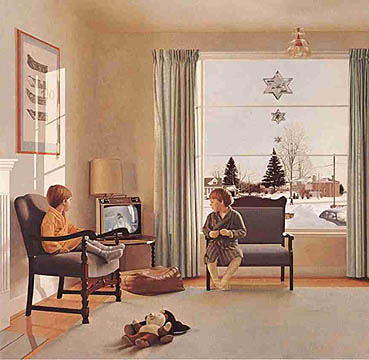 I also wrote about a short review essay about the 2012 Jack Chambers exhibit at the Art Gallery of Ontario in The Mark News.

The 56 minute film can streamed at John Walker’s website be purchased on DVD directly from Ecotone.