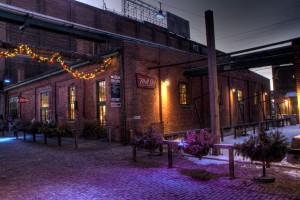 So wherever you found a British military post in those days, you would likely find a brewery. The settlers brought their beer recipes with them, and many farmers brewed their own. The oldest existing brewery in the Americas was established by John Molson in Montreal in 1786.

Communities were located along stage coach routes, each with its inn, so everyone had a beer supply within reach of a horse-drawn wagon ride. Brewers provided some of the first jobs in Ontario’s early settlements. The economy of London, Ontario, for example, was largely built on beer to supply the British soldiers. Carling’s brewery was started at the forks of the Thames in London in 1830 by an enterprising young Yorkshire farmer-brewer, Thomas Carling, and John Labatt also founded his company in London in the 1840s.
Before the First World War there were at least 300 breweries in Ontario. But then came Prohibition. Beer historian Ian Bowering jokes that “temperance was dirty trick – while the boys were away in the trenches, the women passed prohibition.” All of the provinces — with the exception of Quebec — implemented Prohibition at different points during the First World War (1914-1919). In Ontario it lasted from 1916 to 1927.

In Ontario, it wasn’t illegal to brew beer; it was only illegal to sell it in the province. Some breweries survived by selling through a “mail-order” loophole. During Prohibition, Ontario customers started writing to certain merchants in the United States or Quebec (where it was still legal to buy beer), placing beer orders. The out-of-province merchant would send the order to the Ontario brewery, then send the receipt to the Ontario customer wanting the beer. The Ontario customer could then legally pick up the beer at the brewery using the out-of-province receipt.

Prohibition was devastating for brewers. By the 1920s, there were only about 70 breweries left in Ontario and most of them were not profitable. A young entrepreneur named E.P. Taylor saw an opportunity to consolidate many unsuccessful small breweries into a big profitable company. He presented his ideas to Brading Breweries in Ottawa (which had thrived during Prohibition because it was so close to temperance-free Hull). With their help, he set out to consolidate the beer industry. Between 1930 and 1953 he acquired 23 breweries across Ontario, a total of 150 brands. He closed down all but 12, and kept only 9 brands.

Using more scientific, less individualistic industrial methods, he gave us the beer we have today. He decided that the public wanted light, easy drinking beer, and we lost the diversity of our rich brewing heritage. By implementing his “grand design” to a consolidate a few large, dominant, successful and efficient breweries, producing only generic, simple lager and ale, E.P. Taylor shaped the business model that dominated the beer industry in Canada for most of the 20th century.

Taylor owned approximately 60 per cent of the Ontario brewing business by 1939.His company was called the Canadian Brewing Corporation for 40 years until it changed to Carling O’Keefe in the 1970s. During the 1950s and 1960s, Labatt and Molson followed Taylor’s lead and aggressively expanded across the country.
E.P Taylor “cleared the playing field,” thus allowing Molson and Labatt to take positions of market dominance. By the mid-1960s, the majority of Ontario’s 52 breweries were controlled by the “big three” — Molson, Labatt, and Taylor’s Canadian Breweries (later to be known as Carling O’Keefe).

When I reached drinking age in London Ontario in the 70s, we were loyal to the local giant, Labatts, and we would occasionally drink Molson Ex for variety. Every brand had a bit of class association, some more blue collar than others. Beyond that, foreign beer was basically Heineken, and we insulted American beer at every opportunity. No one knew any different. Of course, in those days Canadian taste was not very sophisticated. We thought that a culinary adventure was Chinese food with sweet and sour sauce. We didn’t know what we were missing, but change was in the air, and the hegemony of boring beer was about to be challenged.

Jim Brickman, founder of the Brick Brewing Company, got a taste for fresh, distinctive beers in Europe in his student days. When he decided to figure out how to start a brewery in the early 80’s, he took his research seriously. He went back to Europe and toured 68 breweries in 29 countries (whew!) before he settled on the recipe that became his first brew, Brick Premium Lager. It hit the market as Ontario’s first craft beer in 1984, and enjoyed early success from its home base in Waterloo with almost no attention to marketing. Clearly, the public was thirsty for new beer with style and character, and a bit of a ‘David against Goliath’ story to it.

“We think of them as the good old pioneer days of craft brewing, way back in the 80s,” says Chris Goddard of Steamwhistle Brewing.
“For the guys who started their own breweries, it was tough. They were full of vim and vigour. Nobody believed they could compete.”
Other larger-than-life characters started breweries in other parts of Canada around the same time as Brickman. The first was the Granville Island brewery in Vancouver, and one of the original founders, Frank Heaps, returned to Toronto to start Upper Canada brewing. “There really isn’t anyone else like Frank,” says Chris Goddard. “We’re inspired by Frank’s business values: treat your employees like friends and family, grow deep roots in the arts, get out and wear out some shoe leather on the streets to build your business from the grassroots.” Frank is now the chair of Steamwhistle’s board, and his son Cam is one of the founding partners at Steamwhistle.

The spectacular railway Roundhouse that Steamwhistle acquired and restored in 1999 is a popular space for events, including a lot of weddings. This March marks the tenth anniversary of Steamwhistle brewing at the Roundhouse.

Craft beer is brewed with traditional methods, with simple ingredients and a focus on distinctive character and style. It’s an approach to brewing, which in principle may be carried out on any scale.

Since the 80s we have witnessed the growth of craft brewing in Ontario. The Ontario Craft Brewers Association, whose members are all independently owned, has 25 members. A number of interesting beers produced here don’t qualify as Ontario craft beers because they are owned by transnational corporations. For example, Sleeman and Upper Canada are now owned by the Japanese company Sapporo.

In the Golden Horseshoe we have a wealth of fine craft brews that are well worth tasting including Cameron’s, Wellington County, Black Oak, Trafalgar and Nickelbrook. There are also some great beers made right in the City including Great Lakes, Mill Street, Steamwhistle, Amsterdam, Granite, and Denison’s Weissbier (Bavarian wheat beer). Denison Brewmaster Michael Hancock exemplifies the intense passion for excellence which has earned our brewers the highest awards in international competitions.

Great Lakes is the oldest craft brewery in Toronto, started by the Bulut family. Founded in 1987, the Bulut family bought it in 1991 with the idea that it would be a nice family business for Bulut senior and his four kids. Now, almost 20 years later, son Peter Bulut says that “two and a half” of the kids are still working at the brewery.
They have an open fire, copper brew house built in Germany in the early 1900’s. Their own evolution started with easy drinking lager in the 90s. Now they produce a range of lager and more full-flavoured beers like the Devil’s Pale Ale and Winter Ale. Soon they will release their new West Coast style pale ale, the Canuck.

Where ever you live in Toronto, you can find pubs and restaurants that feature local craft beers on tap — Rebel House on Yonge south of Roxborough, the Gladstone Hotel on Queen West, Dominion on Queen East (in the 1889 Dominion Brewery building), Jamie Kennedy’s Gilead Café near King and River, the Only Café on the Danforth near Greenwood, La Palette in Kensington Market, Cowbell My Place on Bloor West, Victory Café on Markham south of Bloor, the Magic Oven’s four restaurants, and many more. C’est What at Church and Front is a brew pub with several of its own brews, as well as an extensive selection of all-Canadian beers — 35 craft beers in tap! Located in a 19th c. brew tankhouse down among the cobblestoned lanes of the Distillery District, the Mill Street Brewpub is one of the coolest in the city.

There are a few annual beer events in Toronto such as the Festival of Beer. The Brewers Plate is a popular annual spring feast celebrating fine Ontario craft beers matched up with several local chefs offering local, sustainable foods and food artisans. It provides guests with a rare opportunity to chat with chefs like Brad Long and Jamie Kennedy, and to meet the brewmasters from our most celebrated Ontario craft breweries, like John Graham from Church Key Brewery with his extravagant beard and kilt. 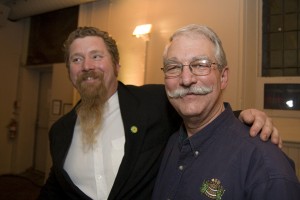