A Conversation with Northrop Frye about William Morris

Interested in Frye, author of The Great Code? Ever heard of Morris, the English arts and crafts radical of the late 19th century? William Morris was a multi-disciplinary designer, poet, social activist, translator of ancient Icelandic sagas, and a central member of the Pre-Raphaelites. Dante Gabriel Rossetti (12 May 1828 – 9 April 1882) was perhaps the most famous of those, and Morris’s wife was the model for the heroine in many of Rosetti’s gorgeous medieval scenes.

Morris said, “Have nothing in your house that you do not know to be useful, or believe to be beautiful”.

First published in the Journal of Pre-Raphalite Studies, Twenty Fifth Anniversary Issue, Spring 2001. Reprinted in the final issue of the Northrop Frye Newsletter, Vol. 10, May 2004.

This interview with Northrop Frye took place in January 1988. It was originally intended for publication in the Journal of Wild Culture, a magazine that ceased to exist on paper in 1991 now thriving online at wildculture.com. As a co-founder of the Society for the Preservation of Wild Culture and senior editor of the magazine, I had the idea that I would like to interview Northrop Frye about William Morris. The vision that inspired Wild Culture—a marriage of ecology and imagination pitched in an amusing and harmonious key, with a vernacular and dilettante edge—seemed to owe an unacknowledged debt to Morris. I thought perhaps that I could link the principles behind the Arts and Crafts Movement, and Morris’s radical vision of social and ecological justice, with the mission of Wild Culture. I was fascinated by the way Morris walked his talk, living his ideals. If a conversation with Professor Frye could elucidate Morris’s social attitude, I imagined, then the parallel path ahead might be illuminated for our circle of cultural workers and green city activists in the Society for the Preservation of Wild Culture. In any case, it would be interesting to try.

On learning of my interest in Morris, and after examining a few issues of Wild Culture, Professor Frye graciously agreed to talk to me. He consented to a thirty- minute interview at his book-filled, cozy first-floor office in Massey College at the University of Toronto. Like patient, skeptical Professor of Comparative Wizardry at Hogwarts, he seemed at times to enjoy the interview, and at times to endure it. The result is a series of questions and answers on several aspects of Morris’s thought. 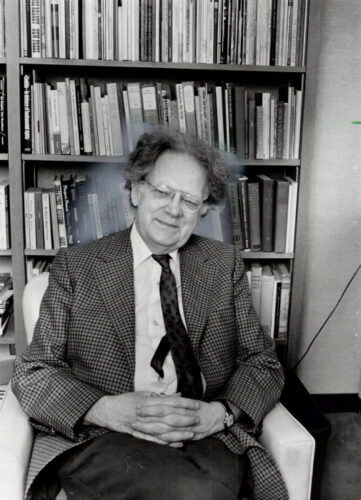 Lowry: Morris believed with Ruskin, that beauty was unattainable except as the expression of man’s joy in every-day work. His company, the firm, was a group of artists producing together what most interested them. Is this ideal relevant for artists today?
Frye: Well, yes. That is the sense of craftsmanship as linked with creativity and secondly with social function you learn from Ruskin: that where you have gross inequalities in the leisure class and an exploited class, the result is more and more useless and ugly products are made for the benefit of the leisure class. And so that’s why Morris says, ‘have nothing in your house which you do not know to be useful or believe to be beautiful’ and that kind of sharpened sensitivity to the things around you and the things that you use and handle all the time.
Lowry: Well Dr. Frye, I see we’re out of time. It has been delightful to talk with you about Morris’s views on nature and culture, and the spaces that we inhabit between the two. Thank you very much.