Many of us enjoy traveling to far-off places – usually by air – sometimes for only a weekend. Southern Ontario attracts large numbers of visitors arriving by plane. Heck, they just expanded Pearson Airport to accommodate increasing traffic. It’s normal, it’s a way of life that’s taken for granted…and it probably won’t last much longer.

The end of cheap oil and the huge climactic impact of aviation could profoundly change the travel and tourism industry in the coming years.

Some claim it will be business as usual for air travel for a long time to come, even if the European Union makes airlines pay for carbon credits. Because we all love to fly, it is expected that the market (you) will absorb ticket price increases resulting from carbon-offsetting costs. But these optimists may underestimate the politics of climate change, as governments respond to extreme weather and food supply problems with new laws.

Airfares will also be effected by the rapidly rising price of the kerosene that keeps those silver birds up in the air. “Energy intensive industries like commercial aviation will suffer first [as fuel prices go up],” warns economist and airline pilot Alex Kuhlman. For most airlines, fuel is the second highest expense after labour, and the cost of jet fuel has more than doubled since the beginning of 2004. Fasten your seatbelts.

Cheap airfares and the vast web of international air travel depend on subsidies and tax breaks at every level of the aviation industry. Aviation is completely outside the Kyoto Protocol, despite the fact that air travel has at least twice the climactic impact of any other mode of transport. Why? Now that we understand the life-threatening nature of climate change, this no longer makes sense. Whether or not you agree with Friends of the Earth director Tony Juniper that “aviation is a rogue sector and its environmental impact is out of control,” you may feel that change is in the air.

What’s the future of air travel? Well, fuel is getting more and more costly, and the profit margins of airlines are already pretty thin so, as air travel becomes increasingly more expensive, many airlines will go under and others will merge to survive.

It means that the hospitality business everywhere needs to shift its focus toward regional marketing, to bringing in customers who don’t have to travel far to enjoy the amenities they’ve grown accustomed to. Long distance travelers will be rarer birds, and they will need to be encouraged to stay longer and to slow down their pace. The jet set will continue to fly as much as ever, but the era of cheap, happy-go-lucky air travel will soon be over.

In Europe, the transition from planes back to trains will be relatively smooth, with the excellent rail network throughout the European Union and many high-speed links on major interurban routes. In North America this is not the case, and there is an urgent need for major investment in rail transport infrastructure. The new plan for Metrolinx, an integrated public transit system for the Toronto region, is an exciting move in the right direction.

What can we do? As long as aviation is not adequately regulated in Canada or internationally, and as long as the cost of flying continues to be an affordable choice, we need to voluntarily limit our flying.

From the perspective of the local food and hospitality industry, this dark cloud has a silver lining. More of us will travel by ground, going shorter distances and staying closer to home for our fun. We’ll begin to admit that New York is not a cooler place to visit than T.O. – just different.

So…consider regional holidays and fewer optional plane trips, whether for brief visits or vacations. Think creatively about ground transport by combining train, bus, boat, and fuel-efficient vehicles. If you fly, plan to stay longer, soak up more of the culture, use public ground transit, and go self-propelled, zero emission when you can (bike, hike, sail, etc.).

To reduce business travel, we can look to the examples set by corporate leaders such as Swiss Re, Ikea, Interface Carpets, and Mountain Equipment Co-op to adapt efficient decision-making about travel. Smart businesses now use video-conferencing, plan rail travel to facilitate working on the road, and maximize the number of meetings that can be combined in a single, extended visit.

The future of long distance travel looks expensive and/or slow. Perhaps the journey will merge with the destination as we rediscover travel by water or even airship. Have you heard that there is a new zeppelin (no, not a band) in the air? The new craft designed by Germany’s Zeppelin Luftschifftechnik – named Zeppelin NT, for “New Technology” – is filled with helium rather than the highly flammable hydrogen that fueled the ill-fated original. Count Zeppelin’s granddaughter, Elisabeth Veil, calls it “a calm way of flying.”

Personally, I love trains and walking. 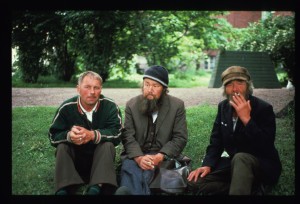